I really enjoyed reading this book. The story is entertaining, compelling and educational for children and adults, teaching life lessons about inclusion, treating everyone fairly and being kind to one another. The illustrations richly reflect the key parts of the story and make the book come alive. It is a very cute story told through sports competitions using an interesting array of characters with great personalities. Would be a great gift – especially for adults to read to kids.

We got a sneak “peek” (pun intended!) of this book, and my 9 year old couldn’t stop talking about it. She loved the various animal characters who had very descriptive personalities (I know, because she continually regaled me with them as she was reading the book), and she caught on quickly to the inter-workings of Creaturapolis and its purpose. It has a wonderful message that everyone can relate to, no matter what your age. I’m planning to buy this as a gift for every animal-book-loving kid (young AND old) that I know!

D.M. Peek hits a home run with this animal and sports related book aimed at inspiring young people to compete hard and fair while displaying great teamwork and sportsmanship. It is the perfect book for boys and girls hungry to learn about how to work together while pursuing excellence. The illustrations bring the different animals to life and add an element that perfectly complements a child’s imagination. I hope this is the first of many from D.M. Peek!

This book will stimulate children’s imaginations , and transport them to a fantasy world. The colorful characters and skillful storytelling would make a great Movie. Entertaining from beginning to End.

A wonderful author with an imaginative mind. The illustrations help bring the story to life too!

I really liked how descriptive the book was. I could see and understand what was happening and there was a lot of emotion in the characters. The story was very interesting and it’s thrilling at the end of lots of the chapters to be left on a cliffhanger. It makes you not want to put the book down because you want to find out what is going to happen next!

I love that the characters have to solve problems and learn how to get along with each other.  Some characters are so kind and want everyone to have fun while others are lazy – just like real life. The final competitions were so exciting and I especially liked the awards ceremony. I was really sad when I finished the book because I didn’t want the story to end. The characters all had to leave and I will miss them – I almost cried! I rate it a 4.5 out of 5 – only because it was confusing at the beginning to learn so many different characters. But by the end of the book, I got to know them and liked them all!

Take a fanciful voyage through a world inhabited by delightful animals. You will fall in love with these characters and will root for your favorite. The Author’s unrestrained imagination will entertain and delight. You will be sad when it ends. What a wild ride!

I was impressed with the detail, the characters, and how much effort had gone into crafting the story. Some characters I liked more than others – of course, the ones who are nicer to others versus the mean ones. I think kids would enjoy this book because it shows that working together as a team versus being an independent loner is more rewarding. The book also demonstrates you should do things mutually beneficial for everyone on the team, not just yourself. I like that the story emphasized teamwork throughout with the animals learning how to compete, how to travel to the event, and how to remain a close-knit team, supporting each other throughout the event.

I would definitely recommend this book for young people. My favorite part of the story was the ending, both the events at Creaturapolis and how the story ends. It’s not a short read, but it’s entertaining, fun, with lots of good twists. It also has some solid moral messages, not too high and mighty, but enough of a focus about getting along and being empathetic. Good challenging read for kids who want more than a short story! 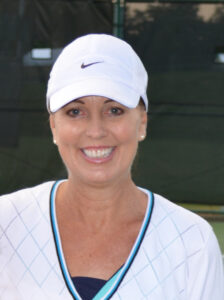 In her years of coaching youth, Debbie discovered a happiness from seeing the delight on a young person’s face when they told a story to an interested person. Children have a unique way of making an everyday occurrence turn into a hilarious caper. Debbie couldn’t believe how much fun it was listening to these fascinating adventures.

She also realized how much children loved and learned from books, noticing that her tennis students would recall helpful life lessons a character from their favorite book had experienced. Inspired, Debbie felt she could have a positive influence on a wider audience than her tennis players if she wrote an entertaining book with likeable characters who shared similar struggles facing young people around the world.

Hearing the reaction to Creaturapolis has made all the years writing the story worth it. Readers have expressed enjoyment, excitement, intense anticipation of what would happen next, and even sadness,  evidence the story had a deep impact. But the most satisfying feedback has been when children identify attachments to characters they are most like. The success of any book can be measured by the emotional bonds the reader has with the characters. Creaturapolis is sure to have a cherished animal for everyone.